SHDH: A Party for Hackers and Thinkers

There's going to be a SuperHappyDevHouse ("SHDH", or "Dev House", as they say) at my house this weekend and I'm trying to explain what this event is all about.

On the surface, it might look like a bunch of humans on laptops. This is from the last one (#4 in Seattle, February 2016) and the one this weekend will probably look similar. We have a few more chairs (thanks, IKEA) and will encourage people to spread out and sit in other rooms, though! Some people weren't on laptops exclusively, but were hacking on hardware or building spectrometers out of cardboard and busted CDs. 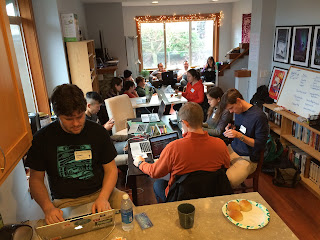 This next photo is from the very first SHDH I ever went to (June 2006, Bay Area) with my partner Adam, who you can spot in most of these photos. It looks kinda similar with laptops and whiteboards. I had brought my Facebook-poking app to work on, through which you could send friends enhanced poke-like messages such as, "You've been impaled by kittens in a pile of more kittens."

I remember Jeff Lindsay (green plaid shirt) asking me upon arrival, "Are you a hacker?" and my response of, "um... yes?" 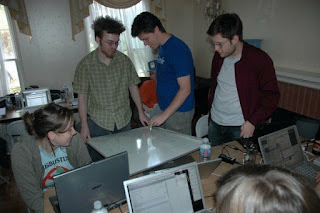 According to Jeff-circa-2016, a hacker is a person who needs to use and build generative technology. These days I'd respond with something like, omg yes I am definitely a hacker, I can't not do that. I gave a talk at splat.rb last month called "Making Things That Let People Make Things... featuring Feminist Hacker Barbie" and my work in grad school has been on Crowd-Driven Computer Vision.

Anyway, SHDH. It's a really special kind of event. It's not really a tech meetup, but there are people learning and teaching new languages and technologies. It's not a hackathon, but there are people hacking on projects, maybe even 1-day projects that they show off in a lighting talk in the evening. To me, it's partly about time to work on a project and make something in the company of others, but it's also about inspiration and exposure to/fostering of big ideas, a taste of hacker culture. At this point, I'd like to refer you to an old guide on How To Invite Friends to SHDH.

These are some things that happen at SHDH. Welcome signs! Now part of the supply kit. 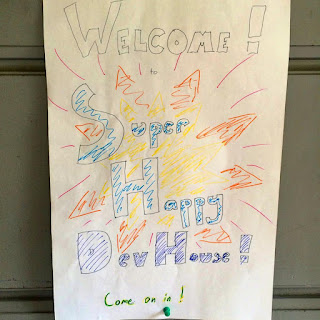 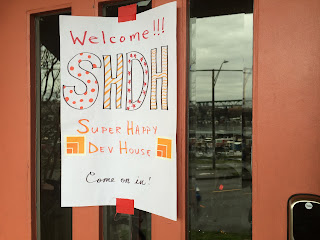 Badges and home-grown badge-printing system! Creating infrastructure for SHDH is a fun part of SHDH! 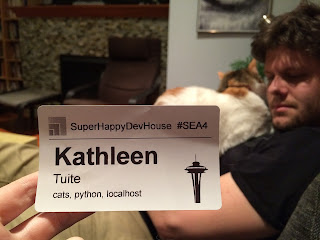 Sleeping! These are from ye olde California DevHouses (see below), but #3 on MLK weekend in Seattle was actually an overnight event (11am-11am) and a couple people stayed over.


What's In Store for This Weekend

It's shaping up to have a bit of a 'zine-theme. Come ready to answer questions such as:

We almost had a visit from the illustrious Kate Compton, who builds a Javascript story-grammar tool Tracery, which has made its way into numerous (good) twitterbots and indie games. Since Kate can't make it, we will make do with her Tracery zines instead.

I'd also like to gather round the fire/TV/projection system and watch this new (not yet publicly available) talk from Jeff Lindsay on Making the World More Programmable.

I'm looking forward to hearing what other people think of these ideas!

The weather will be nice, and we have some outdoor and garage space, so projects that might bring you outside (or into the kitchen!) are completely and wholeheartedly endorsed.

What's happening now in Seattle specifically is a revival of SHDH in the style of the events that took place in the Bay Area from about 2005 to about 2015 before they got too large (e.g. 400 people at a corporate office? SuperHappyBlockParty?) and died off. SHDH also took off for a while in Mexico City, where with over 8 million residents, they actually had 5 parallel DevHouses running! According to my internet stalking, Singapore appears to have had a SHDH just a few months ago and we borrowed the Eventbrite header image from them.

There have been four in Seattle so far, and they've been going great (still small and ad-hoc and home-grown), and #5 is coming up on Saturday! It'll be the last one at our place because Adam and I have been working on a baby project.

Will there be a #6 and beyond? Will Seattle SHDHs grow large and unruly and how can we anticipate and avoid that fate? Is there a need/want for this kind of alternative hackery event in Seattle? (I believe so!) Are people enthusiastic enough to spread the love and host their own? How should we continue to foster the hacker culture here in Seattle?
Posted by Unknown at 12:06 AM