I mentioned Geocities a few posts ago. That was like... 15+ years ago. My other terrible web development secret is that I've been using PHP for the last 6 years, until literally 2 months ago.

I had been forced to make something with the Python-based content management system Plone when I was an intern at Tesla Motors, but for my own stuff, I don't want to just manage content! It was briefly suggested I try Drupal, but again, blarg, a CMS. I don't know the exact reasons why Drupal seems terrible; it just does.

Recently, a bunch of things conspired together to get me to try and adopt a new method of making fancy-pants webpages:
So to all those people who inadvertently or purposefully influenced me, y'all are great. Thanks! 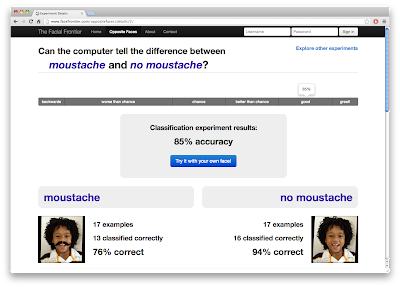 There's a picture of the computer vision face playground website I'm working on. It's live, even! Though I can't guarantee that the backend won't crash and break (the meme quiz is currently broken) or that heroku won't suddenly decide it wants money from me. But you're welcome to try!

I majored in Computer Science in college. A lot of my good friends didn't, and at least some of them have said, "Damn, I wish I had studied CS." Sometimes they even say, "Maybe I should go back to school and learn CS?"

My response is something like, "But you can go out and learn it now!"

But then I'm not able to point them in the right direction.

I have a list in my head of possible ways to start programming (tutorials, easy to learn environments, harder to learn environments that would let you make something you might want to use and show off) but I didn't know which of those sounded good to people. So I made a survey: http://www.surveymonkey.com/s/RCP98L5

Here's what I put on the survey:

I was hoping billions of people would fill it out, but alas. And they were mostly programmers already, so the results are more along the lines of "what would you recommend to beginners and what do you currently like/use?"

Based on the survey, not many people (2) said they'd recommend Codeacademy to beginners.


However, from a beginner perspective, it does have some appeal. Point of success: one person got distracted by Codeacademy during the survey, affirming that it "Sounds interesting!" and "I'm going to try this out right now!" Another person also mentioned planning to check it out. If you try out Codeacademy, I'd love to know how it goes!

P.S. I'm pretty sure the interactive example on the main page is Javascript. There is also a Python tutorial under "Learn" but I am looking at it right now and I'm less impressed because the instructions and the code you type are not as well integrated.

Programming in Processing is basically programming in Java. The only differences are that it's all self-contained (just download it and you're good to go, it even comes with lots of examples) and that the setup cost for making an interactive graphical program is basically zero. You need a setup() function and a draw() loop that will get called every frame, and that's basically it. In fact, you could probably write a program that doesn't even need those.


Nevermind the rest of this post, if you haven't tried Processing yet, go do it right now:

An extra bonus is that Processing is classroom-approved, in that I've heard about it being used in middle school and high school classes. As is the Impressionist Fingerpaint / Painterly Rendering assignment which I've done at UCSC and UW and taught to middle schoolers using Processing.

Extra-extra bonus, Processing lets you run your programs on an android device with virtually zero effort.

A quick shoutout to Python, 5/7 people recommend it to beginners. I would, too, but I think you need a plan or something in mind that you want to accomplish with a Python program. A suggested resource for learning Python: http://learnpythonthehardway.org/

Python and HTML were the most likable things on my list. I can agree with that, since I definitely write a lot of Python and HTML and Python that generates HTML.

The nicest thing about Python in my mind is that it's not very verbose or chatty. You want to print something? print "meow" It's not bogged down with a lot of weird stuff, like semicolons and variable types. Sometimes you want things that Python can't provide, like types on your variables and super-fast math, but for most things, Python is super useful.

Survey people also seem to use C/C++ a fair amount, as well as CSS.  I definitely use CSS to make my HTML look pretty. I, too, code in C++ when I'm not coding in Python.

5/6 people said they used C/C++ as a beginner. I'm not sure if that means beginners these days should go out and try it, or if that's just what was around when people who took my survey started learning to program.

The most disliked thing (4/6 people) was Java. It's probably not the best for beginners, even though it is often used in intro CS courses, because it's very chatty. You want to print something? Oh, that'll be a mouthful: System.out.println("meow");

Maybe the best thing I can do is collect stories of people learning to program via the internet - how they learned and what they made - and then pass those along to other people!