It's a whole new 3D modeling experience! The goal is to make simplified low-polygon-count models that represent the ~million-point pointclouds.

Posted by Unknown at 6:01 PM No comments:

My co-intern, Stacy, from FXPAL a few summers ago invited me to be on a panel on Time Management this year at Grace Hopper! I spoke about "Productive Procrastination" -- making awesome things and sharing them with people, and this blog post talks about that a little bit and some other strategies of mine.

Productive Procrastination
When faced with the choice to get a head start on some not-terribly-crucial work or waste my time on Facebook, I occasionally opt for secret option number three: learn something new and make something for fun. I'll call this "productive procrastination". It's challenging to get started sometimes, so I start small and let myself get sucked into the flow of trying out just one more little experiment before stopping. I also share my discoveries and creations with others, usually by making mini-artifacts and posting them online. The benefits of this are huge: I have cool things to tell people about, I feel motivated and productive, which then often transfers to my "real" work, and I gain skills, ideas, and perspective that help me do my regular work better and faster as well.

A note on Hacking
When I say "productive procrastination", I mean coding/hacking for fun. Maybe even with someone else. And since the GHC panel was targeted mainly at women, I'll say now that I think more women should code for fun because of the extra skills and extra confidence gained. I would tell my younger self to code more outside of class. I wanted and still want to be a better programmer. (At this point, I think I'm quite good and capable of making awesome things, but I still want to improve.) I've gotten loads better by doing fun little projects for the purposes of just trying something new, which don't actually need to accomplish anything, and by learning from coding with other people.

Actual Time Management Strategies
Right, so, here's stuff I didn't talk about in the panel. Somehow, I manage to get things done, and here's how I do that. It's all pretty minimal because I don't want my organizational strategies to stress me out.

Disposable To-Do Lists
In grad school, it's kind of vague what I should be doing and how I should be progressing. I may write out a list of things to do and half-way through, change my mind and realize it's a horrible path and that I should scrap it and try something else. It's much less traumatizing to delete a temporary "todo.txt" or toss a piece of scratch paper than to abandon a nicely written list in a fancy planner or something. Thus, I mostly write things down on scratch paper, whiteboards, post-its and text files.

OMG Post-its
Sometimes I write things on post-its. Small, actionable chunks, only. Then I stick them on my whiteboard above my desk, potentially grouped by priority or something, and when I'm sitting at my desk figuring out to do, I just pick a post-it and do it. Then I pull it off the whiteboard when I'm done! Or I pull all the notes off and make new ones if my overall direction has changed.

Inbox Zero
You're not allowed to stress me out, email! Everything except things I need to actually deal with but don't want to deal with right away get archived. Gmail will find anything I need, and if there's a chance it won't, I'll forward it to myself with some extra searchable keywords.

New Trick: Google Calendar for tracking what I've finished
I've only been doing this for a month, but it's incredible. Kind of like writing post-its for what I need to do, I now write calendar events (on a special research calendar) for what already done. It's like if I save the post-its but they didn't take up physical space. 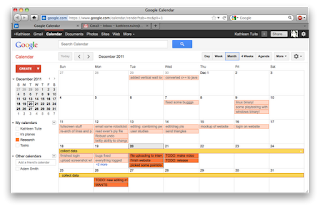 My research project has been grinding along for about a year now, but it's finally coming together and a big deadline is steadily approaching. I needed badly to ramp up the effort, and now I can look back and see that's exactly what has happened over the last 2 weeks. I also vaguely track what's coming up (like what I plan to do tomorrow, or when I should be collecting data and when I should be writing) but I don't let it bog me down. I also have all of my meetings and whatnot scheduled on another google calendar, because I have no brainspace to remember such things.

Slacking Off
I think not working sometimes is an important part of being productive. I am NOT super-productive for hours on end anyway, so I may as well fill the off time with something good. I'll test this hypothesis over the next month, but I think relaxing, eating, drinking beer, exercising, sleeping in, reading, spending time with friends to talk about non-work or to complain about work are excellent extracurricular activities.
Posted by Unknown at 11:20 PM 2 comments: