If you Google "beginner bash", you apparently get a bunch of long, scary, unstyled walls of text that don't look like they'd be that helpful to beginners.

I use bash a lot (apparently I'm in the command line about 8 hours a week according to rescue time) so maybe I have some useful tips to provide. Try using each of the commands! Make dummy files and folders (see the 'touch' command... 'foo' and 'bar' are standard fake names, but I like cat-themed names) and move and copy and delete them!

I don't remember what it stands for. Bad-Ass Shell? Whoops, no, Bourne-again shell. Is Bourne a person? Apparently. A shell is just an interactive prompt, and before there was bash, there was just the regular "Borne shell" called sh. Bash is a unix thing, so it's used for the terminal in both OSX and Linux. On windows, you can get a unix emulator called Cygwin, but the normal windows command line is DOS. I met the guys who made Cygwin! One of them taught me to walk on stilts. Anyway.

If you've used the interactive mode of something like python, you know you can type one line or multi-line code and things run. Same exact thing in your terminal, but the language is bash!

Colors! I wanted to ramble about colors and just having fun customizing your terminal, but additionally, you should pay attention to the color of your cursor and highlight colors and make sure you can actually SEE your cursor all the time. Please don't handicap yourself by making your potentially most powerful tool hard to read. And make your scrollback hella big (in Preferences > Window on OSX). 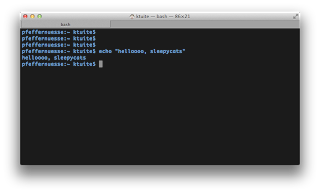 Tab completion and a couple other shortcuts you should start using asap:

Start typing and the hit tab to complete a file name or path or even an executable name! It'll complete as much as it can and then show you hints. Saves you from typing it all out yourself and is faster and less error-prone.

Tell your friends to do these things. Superpowers++

"Where am I and what am I doing?" commands

The command line can be disorienting. If I forget what I'm doing or need a twitchy thing to do while my brain processes something, I'll type ls and pwd

List the stuff in this directory! I usually tell where I am by what is in a directory... and to remind myself what files I might be trying to edit.

I actually put 'a's in my ls commands, like ls -lah but I don't remember what the a does. OH! It shows hidden files (see very end). 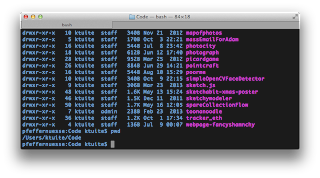 cd <some other directory path>

Move (or rename) a file, without leaving a copy behind

Remove/delete a file... and it's gone forever!
rm -r <directory_name> (to Recursively delete a directory and everything in it. BE CAREFUL WITH THIS ONE...)

This just makes a new file... or updates an existing file's last-modified time. Okay, touch is only kinda useful, but you can use it to make empty files to practice copying and moving around.

Print out some strings or variables! Variables, mentioned below, have $ dollar signs in front of them.
echo $cat_var

Meow! The name comes from "concatenate" in that you can use it to print out multiple files at one in one long concatenated string, but you can also use it to print just one file. By "print" I mean show the contents of that file in the command line. 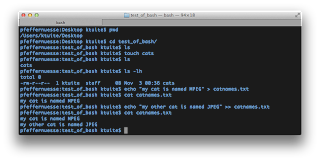 I used a bunch of these commands to make a dummy file called cats so I could write "touch cats", and then I used echo to add text to another file and cat to show the contents of that other file. What commands did I actually type? Lets look at my history below! 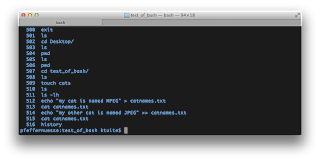 grep helps you search through text file and history for lines containing certain words. Honest-to-god example of how I use grep (and history) every single day because I'm too lazy to remember how to get to my MySQL database server. I also use it to figure out which file contains some particular method that I'm in search of... And other things, but I will have to thing longer/harder about those other things.

Okay, we're finally getting to the heavier-duty bash commands I use a lot, but maybe I should just write a second post with fun bash commands encountered throughout the day on a day when I'm deeply immersed in it.

When I was making a web photo album of my photos when I was 15, I really wanted thumbnails of all the pictures. BUT I HAD NO IDEA HOW TO DO IT AUTOMATICALLY, so I did it by hand and it was a pain in the ass. These days, I would type

You can also do it on multiple lines and not have the semi-colons. the "for / do / done" syntax is what is important. If you investigate bash for loops specifically, you'll get more guidance.

Another real-life story. I write C++ code. Then I write Python code. The python code usually runs a bash script to run the C++ code, where the bash script does some setup and additional file mumbo jumbo that I don't want to do in C++.


You can run these bad boys by saying "sh myFunScript.sh"

This is your personal bash configuration. It's basically a script that will run when your machine starts up to set everything up JUST THE WAY YOU LIKE IT. Like Goldilocks and those three bears.  Unfortunately, I don't remember the difference between .bash_profile and .bashrc ... only that I seem to have both and sometimes one references the other.

One thing to know: the . in front means it's a seeecret hidden file and it wont show them in 'ls' unless you add the -a flag. It also wont show when you're browsing files. If you use git, it writes things in .git folders and files. Use ls -a to look for them!

All these bash commands are powerful because of all the different options and flags they come with. To learn what flags are available, type 'man <command>' to get the manual or man page.

aliases, and how I made 'lady' and alias for 'man'

If you look in my bash profile, you'll see some fine aliases I set up...  including this tweet-inspired one:

Okay, everything I wanted to say about bash off the top of my head is out there. Now it's time to touch (pet) some real cats.
Posted by Unknown at 1:23 AM 5 comments: