Here are some words that were in an email from/about Ingress:

Honestly, "hashtag" is the only word in this entire email that means anything to me. Oh, and "Chapeau". I know that means hat in french.
Posted by Unknown at 1:33 PM No comments:

Figuring out what TO DO

I promised Katie (who previously wrote this idea) I would write down brainthoughts regarding to-do lists and potential to-do list management tools. I started writing such a blog post in the past after finishing typing out a hefty to-do list and then getting overwhelmed by it. I am re-starting it the post because I have a good idea of what to do next, I just can't get myself to focus. (There's so much sunshine and interesting things on the internet! Also I'm kind of giddy about the task I'm supposed to do such that I can't start on the boring tiny place I need to start at.)

Idea #1: Single Task Reminder of What I'm Supposed to be Doing

I've heard people say something like, "What is the single most important thing you can do/should be doing right now? ... So do that."

Yeah yeah yeah, that's a lofty life-philosophy that is probably pretty good to reflect on every now and then, but I'm actually just taking about something that reminds me SPECIFICALLY what SMALL TASK I am doing. If I was pair programming, the other person would (hopefully) keep me on task. But if I'm alone, I'm susceptible to getting distracted by the internet or just by a separate task. 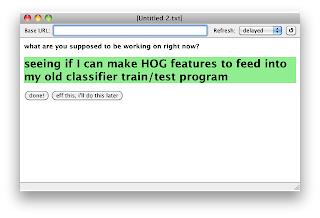 Sometimes I will actually write what I'm working on in a single not-saved text file. But I have dreams of it being part of a sexy styled webpage that gives me a custom link (like http://pastebin.com/ or something) that will maybe even save a history of the things I've been working on.

Idea #2: Something that helps me decide what to work on first/next

Last time I started this post, I wrote, Shiiiiiiit, there's so much to do, I don't want to do any of it. :( I had just finished writing a hefty todo list and it was quite overwhelming. I didn't know where to start and I was tempted to go through the list and try to order it by priority or ease-of-doing or something like that, but I really just needed to just start on SOMETHING. 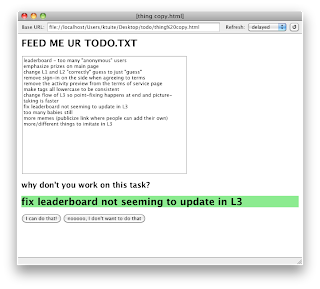 At that point, I dreamed of a different sexy webpage that would let me paste in my TODO.txt and then pick a random line from it and tell me to do it. But it would let me say no to certain tasks and also track which ones I'd started and finished. For a given task suggestion, I could also say, "that's a huge task... the first step in is decomposing it into smaller tasks."

Idea #3: Something that lets me estimate times and compare to reality

I've been on a bit of a kick for estimating how long things will take and trying to become more accurate over time. Hopefully it would make me more confident and realistic about what I can accomplish, and also make me able to communicate realistic plans to other people. Maybe sexy todo.txt tracker from Idea #2 could ask me to estimate times as well.
Posted by Unknown at 4:27 PM No comments:

flying by the seat of my pants

I'm releasing this website called the Face Frontier as part of my research. The idea is to collect tons of photos and labels of faces, facial expressions, and other facial attributes in order to teach computers to understand emotions in faces.

Currently, computers can sort of (under particular viewing conditions) recognize the "basic" expressions: fear, anger, sadness, joy, surprise, disgust. That's because someone has fed in psychology datasets of people in a laboratory making these expressions.


But come on, some day Siri is going to look at your face while you're talking to her and she's not going to look for FEAR vs. DISGUST. She's going to look for mild annoyance and confusion and amusement and attention/distraction and concentration and stuff like that. Maybe you'll be able to communicate via subtle expressions to your phone without actually talking out loud. (Or that old-fashioned typing/screen-touching.)

Getting back to my point, I've developed this website (that still needs a lot of work) and I feel simultaneously amazed that I have cobbled together this system that mostly seems to work, and also super critical of my own work and that I have no idea what I'm doing. 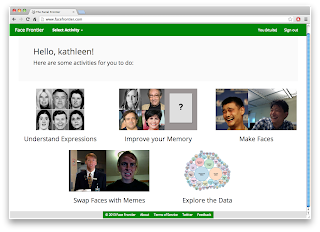 So it means a whole lot to me that you're a) trying it out, making me laugh, cheering me on and b) giving me feedback, pointers to things that are broken, and clues about what to focus on to make it a better experience. 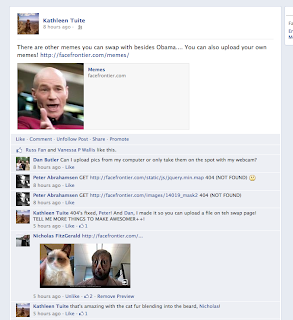 Maybe it's an awkward and inefficient way to go about work, but I rather like Facebook being a source of bug reports intermingled with grumpy cat face swaps.

Now I have grand plans to redesign the flow of the site so if you get sucked into swapping faces with Not Bad Obama, you'll be directed to even more excitement and adventure.

Onward!
Posted by Unknown at 9:45 PM No comments: